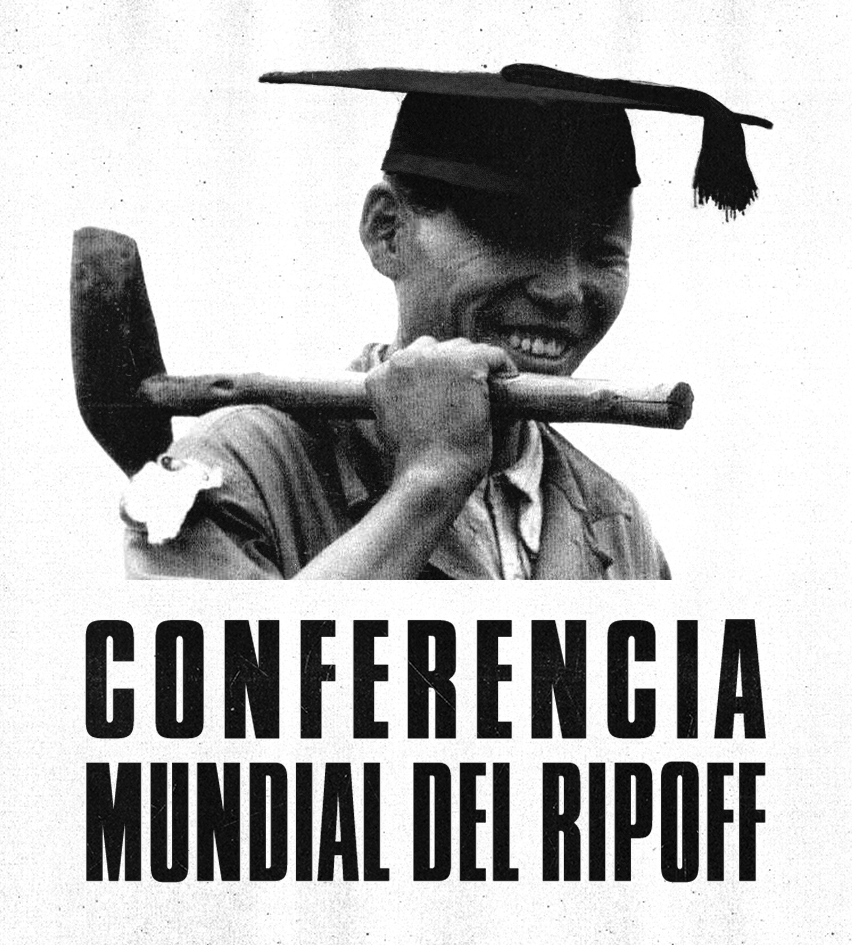 Gonzalo Arechaga is the editor of the zine Conferencia Mundial del Ripoff, which focuses on the extreme end of hardcore punk music. I interviewed Gonzalo to find out more about the zine as well as about the punk scene in Argentina. I learned that not only is there a thriving scene in Argentina with some very creative and hilarious band names (Herschell Crustofsky!), but that there was a “Mapunkie” movement through which Mapuche Indigenous youth radicalized and organized themselves.

Much appreciation to Gonzalo for doing this interview in English, since my Spanish skills are limited. Gonzalo also translated an excerpt from my book into Spanish for the upcoming issue of Conferencia Mundial del Ripoff. Punk has always thrived by creating connections across borders, and recent Latin American punk scenes stand out to me for keeping the raw spirit of rebellion alive, so I’m happy to get an insider perspective from Buenos Aires on punk, protest, zines, and scene-building.

Can you give us an introduction to the zine Conferencia Mundial del Ripoff? What does it focus on? When did it get started? Who contributes to it? How’d you come up with the title?

Conferencia Mundial del Ripoff (Ripoff World Conference) is a fanzine about extreme hardcore punk, which publishes mainly informative articles, and not so much interviews, lyrics, reviews, etc. It started out as a silly joke but ended up turning into a serious publication. In 2015 I wanted to organize a series of gigs to invite extreme hardcore punk bands that had celebrity names (like StevexJobs, Luca Brasi, Herschell Crustofsky, etc.), and since I needed a name for the event, it occurred to me that a conference was a possible space to gather celebrities from all over the world. I added the “ripoff” thing because many of the bands that participated had the habit of appropriating the art of the typical exponents of the genre, such as Charles Bronson and Spazz. So I put both ideas together to name the festival. The first year, in addition to the concert, we put together an exhibition with appropriated artwork from the hardcore punk groups of Buenos Aires. For the following year it occurred to me that it would be cool to publish the proceedings of the “conference”, and thus the fanzine was born. That’s why each issue brings collaborations from different people who talk about specific aspects of hardcore punk. Anyone can participate, as long as they write informative articles on this topic.

Why did you decide to focus the zine on extreme hardcore (crust punk, thrashcore, fastcore, powerviolence, d-beat, noisecore, etc.)?

I think extreme hardcore punk is my favorite musical genre; it was my first love with music. Ever since I heard Bad Brains, I was interested in fast bands that pushed the boundaries of punk. And something that I noticed is that there was almost no information about the history of the genre in our country. Most of the articles and documentaries focused on the brief period in which Buenos Aires Hardcore existed, with a sound closer to NYHC. And there was no research on the extreme hardcore punk movement. So the “Conferencia …” fanzine gave me a space to investigate this topic.

Over the last year or so there have been some very inspiring protests and rebellions all over Latin America. It was especially striking how people refused to back down, tire out, or be appeased with reforms. What relationship has punk in Latin America had to any of these protests and rebellions? Did the punk scene contribute to that spirit of rebelliousness in any ways?

As protests grew in Latin America, the punk movement always went hand in hand with them, as an arena of rebellion and liberation. Punk creates a space to discuss new ideas, where dissent is welcomed and authorities challenged. It is a music that empowers, that inspires to act. An interesting case in our country (Argentina) is that of the Mapuche leader Facundo Jones Huala, sentenced to nine years in prison for fighting for the ancestral recovery of his lands. In his teens he was part of the Mapunkie movement, where young Mapuche people used radio shows and fanzines to express their discontent. Punk was the engine for these teenagers to find a space to reaffirm their identity, and to organize themselves. Another case occurred this year, when abortion was legalized in our country, marking a milestone in the feminist struggle in Latin America. From its beginnings, punk was an area where these ideas were promoted a lot, for example in spaces such as the Belladona festival, or the well-known split between She Devils and Fun People called “El aborto ilegal asesina mi libertad” (Illegal abortion kills my freedom). All this was a breeding ground for these ideas to be popularized later in the new generations. As I said before, the practice of DIY permeates other aspects of the social and political life of those who participate in this subculture. From everyday life, to ways of organizing and relating to struggles.

A very interesting annual event is the Feria Del Libro Punk & Derivadx (punk and derivatives book fair), where publishers of books and fanzines, authors, cartoonists, and readers meet. There you can find fanzines such as Bailar o Dormir, Panorámica Subterránea del NO(A), El Ojo Blindado, and Alto y Klaro. Classic books such as Punk la muerte joven by Juan Carlos Kreimer, and recent releases such as Gente que no, Derrumbando la Casa Rosada, or Sociabilidades punks y otros marginales. Even editorials such as Alcohol & Fotocopias, or Tren En Movimiento Ediciones. Feria Del Libro Punk Patagónica (The Patagonian Punk Book Fair) is also held, bringing together members of the punk culture in the south of the country.

As for webzines, there are some very good ones like El Secadero, Arte y Cultura Punk, and Saugerencia. There are the podcasts Brea, Movimiento Tenso, and Ruidos en el Fondo, and radio shows like Boombox (sonido sin comprimir), Tormenta Mental, and Skatezofrenia radio show. As for labels, they are Inerme Discos & Libros, Pogo Discos, Ugly Records, Revolution Discos, Los Pájaros Records, Percha Records, Menos Televisión / Más Revolución, Chaina Records Inc., FRZ – Fichines Ruido Zafarla, Xen el desiertoX, or Catarata Records, among many more. And for those who want to know a little more about the history of the movement, there are documentaries such as Desacato A La Autoridad, Heroxs Del 88, Hardcore Punk: 25 Años, or Grita: Buenos Aires Hardcore 90/95. Although punk was more popular in Argentina in the nineties, punk is still alive in the neighborhoods with thousands of bands and new ones constantly being born.

How does Conferencia Mundial del Ripoff make connections between punk scenes in different parts of Argentina, Latin America, and around the world?

The idea in each issue is to have articles from different regions, in order to appreciate the similarities and differences in each place. In the 2020 edition there are articles from the scene in each province of our country, with the intention of getting out of the centrality of what happens in the capital and having a broader view of the movement. There is also the article about bands named after celebrities that shows how bands from all over the world had a similar approach to situations in the hardcore punk community in the late nineties. For the next issue, the aim is to have articles from the extreme hardcore punk scene throughout Latin America. As I said before, it is something that started as a joke, but it gets bigger over time.

Finally, how can people read or contribute to Conferencia Mundial del Ripoff?

To read it online, it is available for free on the site archive.org. If someone wants to make physical copies of it, they can contact us to send them the files. And to contribute with an article, you can also write to our social networks and tell us your idea. We love having collaborations from all over the world!

Gonzalo Arechaga is a researcher oriented towards music and counterculture and a native of José C. Paz province of Buenos Aires. He is a technician and producer on FM La Uni 91.7, the radio station of the National University of General Sarmiento, where he produces various radio shows that spread the independent music of the region. He is also edits various publications, such as “Conferencia Mundial del Ripoff” (a fanzine about extreme hardcore punk), “Archivo Subterraneo de General Sarmiento” (about the counterculture in this region), and “José C. Punk” (fanzine about punk in the city of José C. Paz). He is one of the producers of the podcast “HC Punk Mas alla de la Gral Paz”. He is also one of the creators of the record label FRZ (Fichines Ruido Zafarla), and plays bass in Talacactus and WWW (previously in PSOAS and Chaki Chan).

David Pearson is a music historian, saxophonist, composer, and the author of Rebel Music in the Triumphant Empire: Punk Rock in the 1990s United States.

View all posts by David Pearson →

This site uses Akismet to reduce spam. Learn how your comment data is processed.

Check out the book 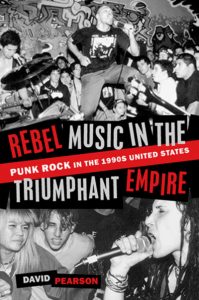